I got an idea for making a floating 3D image/sculpture in the middle of the night. I’m sure this has been done before somewhere else, but it was fun discovering and experimenting with it. The basic idea is to build up a 3D image in space by slicing the object in equally spaced intervals, then printing those slices on a transparent medium. In my case I used simple transparency slides which were printed using a laser printer.

First I wanted to get a basic idea of how the object (a sphere in my case) would look sliced up, I especially wanted to see if it would even give a realistic image. So I fired up Processing (http://processing.org/) and wrote a simple sketch that would automatically compute the size of each circle in space such that the circles combined would form an image of a sphere. Then I played with all of the different parameters, mostly slice spacing and number of slices, to see what would give a good image. I finally settled on 13 slices for the sphere, plus two blank slides on the front and back to help frame it. The trick now is to find some sort of spacer to use that is close to the desired slice spacing. I raided my wife’s craft supplies and found some clear pony beads which were very close to the spacing I had envisioned, then ran my Processing sketch again to compute the exact sizes of each circle so everything works out correctly. Once I had the sizes I fired up Illustrator (though you could do this in Processing or some other drawing program quite easily) and drew the circles out. I decided to make each slice 1/4 of a page (5.5” x 4.25”). I also drew in small guides so that I could punch holes in each of the four corners for assembly.

I whipped up a quick stand using some 1/8” stainless steel rod and 3/8” rectangular aluminum stock to hold the slides and began assembling the entire thing.

Here is the finished project: 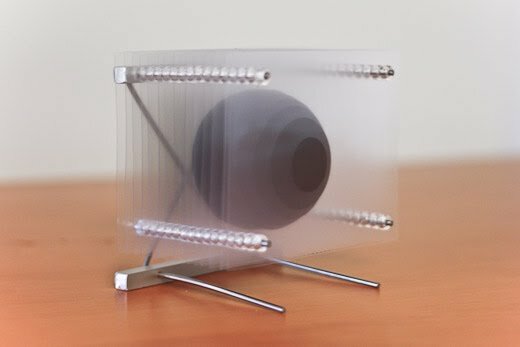 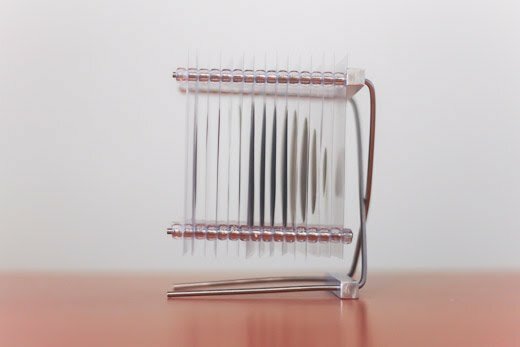 This ended up being a good proof of concept. It would be fun to make larger, more robust versions of the same thing. You could use sheets of acrylic to separate the layers and create an acrylic cube with the image embedded inside.